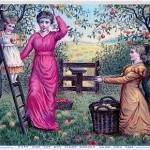 I used to feel such envy of my country cousins in Autumn, imagining that they were out in sunny lanes, gathering abundant free produce from the hedgerows. Perhaps they were – but I lived in the city, and knew that the city has no hedgerows.

But, over the years, I have discovered that the city, too, has it’s free larder for the foodie forager – you just have to know where to look. I now pick plums, damsons, apples, sloes, and several different types of berry without leaving the city – sometimes without even leaving my own neighbourhood. 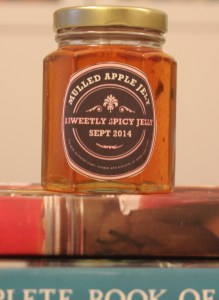 Some fruit has snuck in wherever it found a place – elderberries for example, perfect for making Larder Love’s dark, fruity chutney, have tucked themselves into gap sites, disused industrial yards, and cracks in walls. Some fruit has been planted for its pretty blossom in spring, its autumn fruit an overlooked bonus. Crab apples are the prime example, and make the perfect base for Mulled Apple Jelly. And some of it has become so traditional in gardens that we don’t even register it as a plunderable producer of fruit – take the humble sorbus/rowan tree, found in so many front gardens for example. Rowan Jelly is found in the poshest of deli’s – so why not in your cupboard, for free?

(Side note: rowan was believed to ward off evil entities of various sorts, and was planted by front doors to keep houses safe. That’s why, even now, it feels like a front garden kinda plant.) 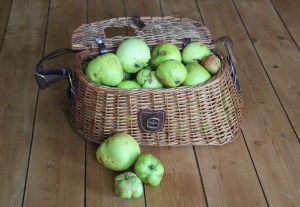 Autumn is the perfect time to go looking for fruit – the urban hedgerow is signalling its existence with jewel-bright produce right now. So keep your eyes open as you go about your usual business. If you want to actively seek out free fruit, look for green highways – urban features that stretch out into the countryside – like canals, or old railway lines that have become cycle paths. The Sustrans website will let you check out which bit of the National Cycle Network – much of which is made of old railway lines – runs near you. And carry a few plastic bags with you at all times: you never know when you are going to bag some brambles or find some windfall apples waiting to be used. It goes without saying (but I’ll say it anyway) if you are not sure if the fruit you have found is edible – look it up. The “River Cottage Hedgerow ” book will help you identify pretty much every edible plant you could find anywhere in the country. Happy hunting.

Posted September 15, 2017 by tartanmum in category "Preserve Something