Scotch Broth In A Hurry 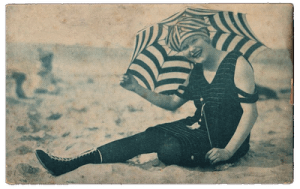 It is the first day of May, it is raining and it is cold.  I want summer.  In the absence of summer, I want a bowl of Scotch broth.  My mum used to cook us Scotch Broth every weekend.  (This is probably not true:  she probably bought tinned soup four weeks out of five. But it was the broth that stuck in my mind, and to my ribs.)  Scotch Broth is the risotto of the north, a satisfying, grain-based, meat-stretching, vegetable-rich bowl of thriftiness.  I want a pot of scotch broth wafting thrifty nostalgia over my kitchen.

I have half a packet of Vegetable Broth Mix and lamb stock cubes in the cupboard.   It will make a broth that tastes fine, but the scent of childhood weekends will be replaced by the faint whiff of dried onions.  Not what I am after. 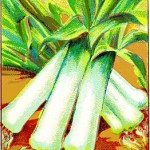 I could make a ‘proper’ Scotch broth:  hand-chopped root vegetables,  broth mix, stock made with the bones left over from our Sunday lunch.  This is THE way to do it:   a big, satisfying potful of Home.   Homemade stock has substance and savour and depth that stock cubes lack, not to mention little bits of meat.   And, had we had lamb for lunch on Sunday, that would be the way to go now.  We had toasted cheese.

Actually,  I don’t even have in enough fresh vegetables.  I rummage in the freezer and find a bag of Morrison’s Casserole Vegetables bought by mistake.   I never, never buy frozen root veg.  All the frozen root veg I have ever, grudgingly, eaten looked like tiny orange dice.  Dice don’t say wholesome, earthy goodness to me:  buying lamb bones and fresh vegetables to make broth doesn’t say leftover-exploiting thriftiness. Hmmm.

I cook half of it with a lamb stock cube, pearl barley and a bay leaf.  At the very end I add frozen peas. I worry that it will be bland and watery.   But the vegetables look chunky and hand-prepared with a tiny amount of bite and some flavour. Much prettier than the unconvincing slivers that dot packet broth, and tastier. 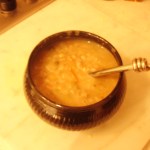 So I get my bowl of broth without extra cost, and discover (again) that frozen veg is the thrifty cook’s friend.  I also discover that Gordon Fearnley Oliver is right:  in the land of Real Soup homemade stock is king .   But if you don’t happen to have fresh vegetables and a chunky lamb bone to hand, frozen and a stock cube is still worth eating.

By the way, although it pains my tartan heart to say this, you can make a tasty broth with other meat stocks too.  They won’t be authentic, but then, neither is tartan.