5 Ways To Turn Meat-Eaters Into Pulse-Lovers

One Simple Change To Cut Your Food Costs 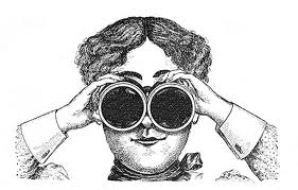 I have been crunching some numbers – specifically the number of grammes of protein in different foods. Something Jack Monroe said on A Girl Called Jack chimed with me.  She points out that the most expensive part of a main meal is the protein while the starchy carbs are generally the cheapest.  That being the case, the key to thriftier dinners in Tartan Towers must be changing to cheaper sources of protein, yes? I decided to look into that. 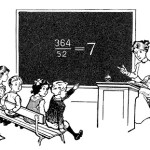 This week I have spent an unreasonable amount of time looking up the protein content of all the foods I could think of. I worked out how many grammes of each made up 45g of protein (an adult’s daily intake, more or less) and then worked out how much that amount of each food would cost at a supermarket.  Then I ranked them. I need to get out more.

There were no surprises about which protein source is the most expensive. Meat costs most, and so it should – done humanely animal husbandry is high-maintenance and resource-hungry. Meat is followed – not especially closely – by fresh fish.  Frozen fish is less expensive, costing roughly the same per gramme of protein as eggs and nuts. Tinned fish and cheese are cheaper, milk cheaper still, but the winner of the cheap protein award is… pulses.

In fact, pulses also get nominated for the frugal fibre prize and the thrifty iron cup, as well as winning medals for low fat levels.  So swapping some of our meaty meals for bean-based ones will cut our costs AND improve our diets. Simple.

Thrifty Pulses And How To Get Carnivores To Eat Them 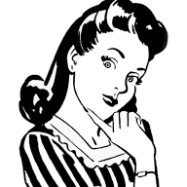 I don’t need any persuading here:  I love a lentil and cheerfully champion chick peas. The rest of the Tartan Household might get on board less willingly, though. At the moment, my tartan carnivores eat a pulse-based dinner once a week, but they do love their meat.  Tartan Dad in particular becomes despondent if there is no sign of a dead animal on his plate. (He claims it’s a man thing.) They do already eat certain pulse dishes quite happily though – baked beans on toast, lentil soup, dhal with a curry – surely I should be able to nudge them further into lentil-love? 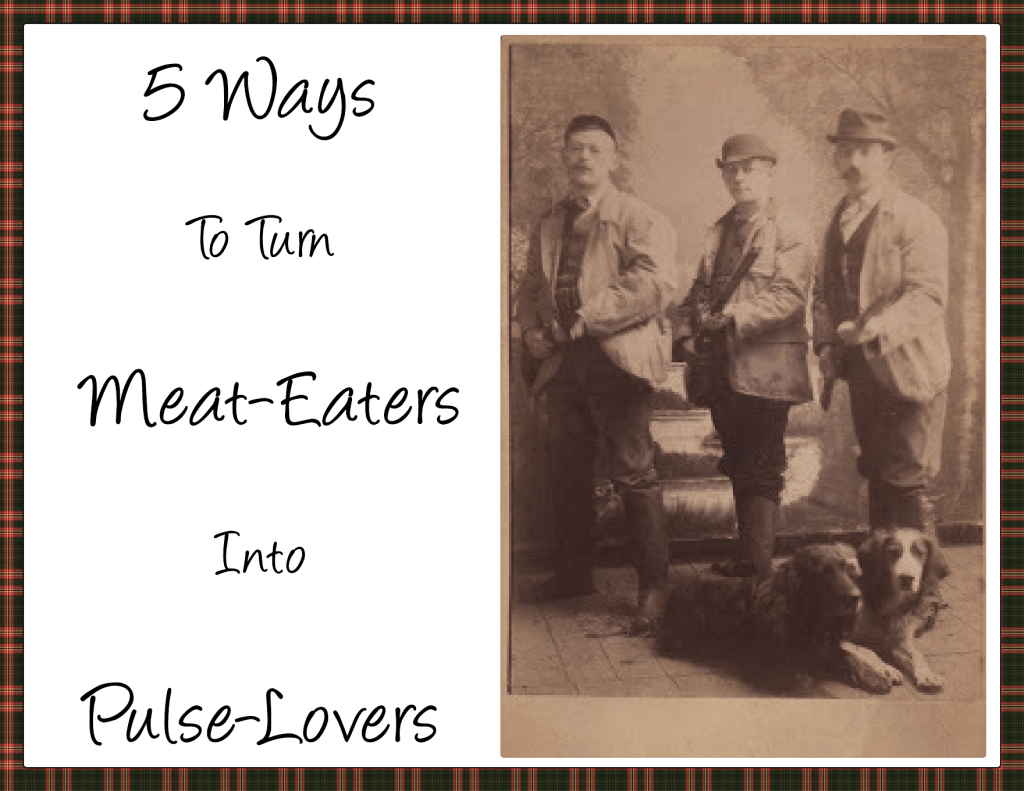 1  Mix pulses with meat to break your carnivores in gently.  Make a meat dish but bulk it out with beans.  If you cook the beans in with the meat they will absorb the savour. We already do this in chilli con carne – I am going to try the same approach with other meat stews., adding white beans to a chicken casserole, haricots to a beef stew, lentils to stewing sausages.  Or I might try this Spanish Meatball And Butterbean Stew from BBC Good Food.

2  Use cuts of meat with bones in. Cooked with the beans – as in this spicy chicken and bean stew – they will make the gravy and the beans so full of meaty savour that nobody will mind the fact that there is less meat.  They are cheaper too. And they will make the meat look bigger.  We carnivores are easily fooled. 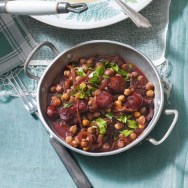 3  Treat meat as a decoration rather than as a core protein source. Make the pulses the main event but add a little meat to stop carnivores wilting in despair. The chorizo in this chickpea dish is a very small portion of meat, but you are in no doubt that the meal has meat in it. This is an idea I first came across in Hugh Fearnely Whittingstall’s River Cottage Veg but thrifty cooks around the world have been working this one for centuries – little chunks of meat in a broad bean risotto, dotted with scraps of chicken in a quesadilla, baked beans with odd chunks of bacon… 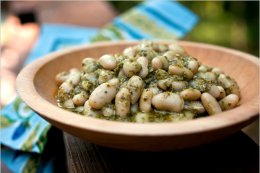 4  Add plenty oil for a ‘man-food’ feel.  One of the reasons we like meat is because the fat content helps to release flavour and signals to our brains that we are eating calorie-dense fuel. Replicate that with generous glugs of vegetable oils, butter or cheese. I would serve these pesto beans with big chunks of fresh bread to mop up the oils or spoon them into pita breads or wraps. Although, I wouldn’t try it at this stage of reprogramming my carnivores – to obviously meatless. So I will try them first with some scraps of chicken on top or maybe a tiny lamb chop. 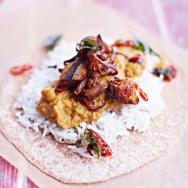 5  Go big to keep it interesting. A bland heap of beans or a blob of lentils can be a bit underwhelming so add texture and colour with chunks of veg, and excitement with big flavours – spices and herbs, wine, quality meat stocks… For me, this aubergine daal from Jamie Oliver fits the bill perfectly – unfortunately, for the rest of the Tartan Household it misses the mark because they all hate aubergine.  I am thinking we could try it with chunks of slow-roasted peppers or maybe wedges of roast red onion.